The Importance of Employer Follow-Up 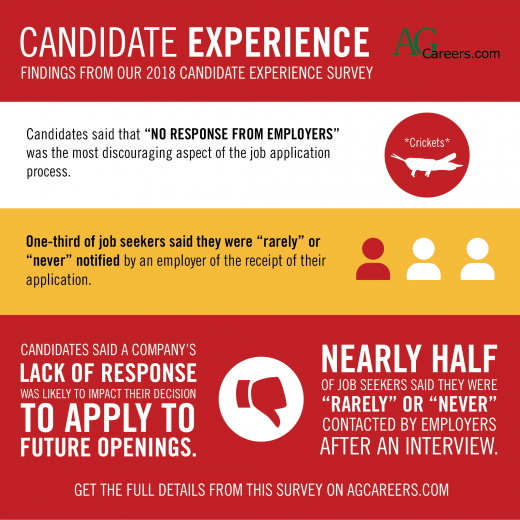 What’s the most discouraging aspect of the job application process? Crickets! Candidates said, “no response from employers” was the most likely cause of a negative experience. Digging deeper into employers’ responsiveness in the 2018 Candidate Experience Survey, AgCareers.com asked candidates how often employers notified them about the receipt of their application. Unfortunately, one-third of respondents said they “rarely” or “never” heard from employers with a confirmation receipt indicating follow-up.

Does follow-up really matter if you are rejecting a candidate?

Even though a candidate doesn’t make the cut for a current opening, there is a chance they will be a fit for a future opening with your organization. AgCareers.com asked candidates if they had ongoing engagement and communication with employers even if they aren’t offered the current job opening. Eighty-four percent of candidates said they had some form of continued communication with employers, even if they were rejected for the current job opening.

Find out more about improving your candidates’ experience; view the full results of the 2018 AgCareers.com Candidate Experience Survey here.