Land a Job With Your FFA Experience 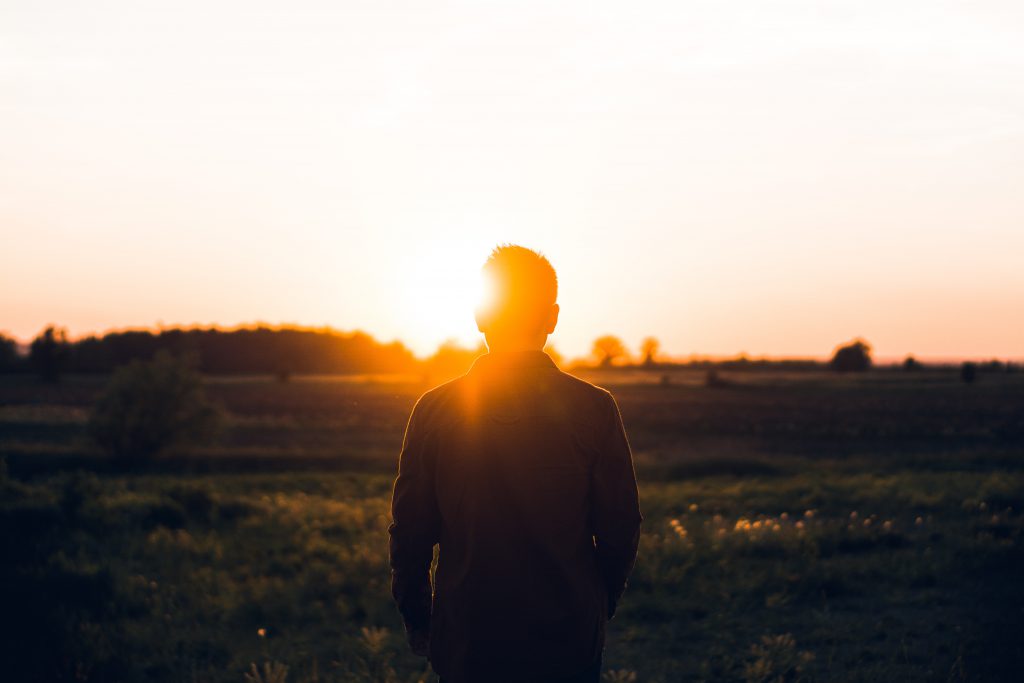 If you participated in FFA in high school and are now seeking a job, or maybe a career change, you should leverage the power of your blue-jacket past. That FFA experience of yours can open millions of doors. Yes, millions.

“A lot of high school guidance counselors and other adults recommend that graduates exclude high school experiences on their resume, but we actually recommend they include FFA on their resumes,” says FFA Alumni Development Specialist Allie Ellis. “We have more than 8 million FFA alumni out there, so that is a huge networking connection for job seekers who were in FFA.”

On the flipside, countless former FFA members who now are hiring employers tend to recruit employees who have that shared background, according to Ellis. “They know the leadership skills and experience FFA provides students, so they seek them out for their companies,” she says.

FFA has noticed a measurable rise in non-ag companies becoming corporate sponsors and an increase in corporate alumni and supporter chapters as well. Ellis says that is because they know FFA members are exemplary from other high school students. “We’re providing the next generation of leaders in the world, and it’s not just in the agriculture field — it’s all over the world and in all sorts of different careers. Companies are well aware of that.”


By AgCareers.com
Published on October 1st, 2019

Virtual Career Fairs (VCF’s) are an increasingly popular way to connect with employers, in fact, AgCareers.com is hosting a Careers in Agriculture Virtual Career Fair on September 5. A VCF allows you to chat with prospective employers without even having to leave your computer! Just because you don’t have to put on a suit and meet these employers face to face doesn’t mean you shouldn’t take the opportunity seriously and prepare for it like you would an on-site career fair.

Here are some tips for how to approach a virtual career fair in a way that will be rewarding for both you and your prospective employer:

• Do your homework beforehand. Just like you would for an on-site fair, you need to take the time to research what employers are registered for the fair. The virtual career fair site will list all registered employers and link to more information about each. Read up on the companies and dig deeper into the ones that interest you. The company will post their chat hours, position locations and what majors they are recruiting.

How FFA Impacted My Career Path 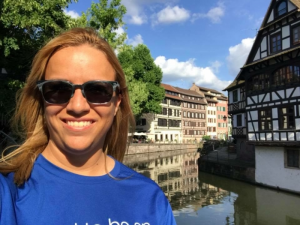 In 2017, FFA alumna Beverley Flatt accepted a position as the content creation manager for Bayer Animal Health. She took a sabbatical from her 170-acre family farm in Nashville, TN, and moved to Monheim, Germany, for the role. Here, Flatt explains how FFA led her to a job with one of the largest agribusiness companies in the world and how you can pursue similar opportunities, too.

I didn’t grow up in a farming family; my parents were high school teachers. In middle school, I babysat for a man who created spice mixtures for fast-food companies, and I thought it was the coolest job. He said that if I wanted a job like his, I needed to study food science. I signed up for agricultural education and was hooked.

How did your involvement in FFA shape your career path?

In college, I attended the State Presidents’ Conference in Washington, D.C. We had an audience in the White House, and I was selected to ask President George W. Bush a question. I asked, if he were in our position, what question would he ask? He said in seven years as president, he had never been asked that specific question and that great leaders ask great questions. After that, I thought about what careers would let me ask a lot of questions and ended up majoring in agricultural journalism.


By AgCareers.com
Published on February 19th, 2019

3 Things to Consider in Taking a Gap Year 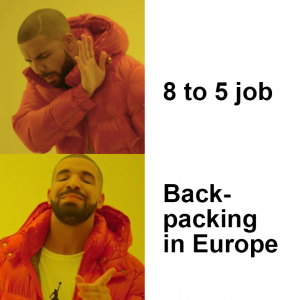 Okay, I confess…deep down, I may have some regret lingering about not jumping on the chance to work in Italy for two years when I graduated from college. That was a long time ago, but with big decisions like that, it’s always funny to think about how different my career path would have been if I’d have accepted that job and taken a gap year (or two). What made me say no? I worried about not being as relevant as my peers in the industry when I came back. I thought my experience wouldn’t be viewed as significant as those who got their foot in the door here first.

My decision back then wasn’t really about taking a “gap year” per se, but it was a big decision with some of the same potential ramifications. There’s quite a few people within my professional network who’ve made the decision to take time off and step away from their chosen career for a “gap year”. Sometimes it’s to find themselves or re-invent themselves professionally, while other times it may be related to their growing family. Regardless of the reason for doing it, taking time away is not something to rush into. Here are a few general things to consider if you’re thinking about stepping away for a bit: Are you an executive or senior level professional in the agriculture industry? If so, we invite you to check out AgCareers.com Elite Talent platform. Elite Talent is a private online community from AgCareers.com where experienced, quality-checked professionals within agriculture can explore career opportunities and be matched with jobs through a confidential platform.

Generally speaking, the Elite Talent community is exclusively for those in a role within agriculture and food making $85,000 or more, although there are some exceptions for specialist roles. Upon registration, your information is sent to our Elite Talent team for review. They will connect if additional information is required or proceed to grant you access to the community.

Once a member, we’ll do the work for you and alert you of new job opportunities that match your desires. Elite Talent also provides additional resources to help you out. There are numerous reasons to consider a degree in an agricultural field of study. Not only will students earn academic credentials that can open doors to new job opportunities, they will also learn skills that apply across a variety of career paths. Here are just a few of the ways ag students benefit from their degrees:

1. Time management: If there is one skill that’s essential in agriculture, it’s working on a schedule. To complete assignments and other projects on a deadline, students must delegate their time wisely. Earning an agricultural degree requires students to set both short-term and long-term goals. Studying in an online program can help provide more flexibility and an opportunity to master time management skills. Learning effective organizational strategies will serve students well for the rest of their careers. AgCareers.com is privileged and pleased to welcome our newest member to our team Kacey Toews! Kacey joins us from a home office in rural Powhattan, Kansas as Talent Solutions Specialist.

I handle all of the new accounts as well as my established accounts and assist them in utilizing our products.

I love that every day is something different and being able to build relationships with the different Agriculture companies every day and see what I can do to assist them in their hiring needs. I also love working with our team, everyone is very helpful and encouraging.

What advice would you give to job seekers using AgCareers.com for the first time?

Make sure to post your resume on our database but also go through our “Career Cultivation” blog. There are tons of helpful hints and interesting posts in the blog that might assist you in your job search. It’s a New Year and many people have set (or are at least talking about) resolutions. Most of us are notorious for making New Year resolutions and quickly forgetting them by mid-January! But, you can’t afford to call it quits so soon when it’s career goals we’re talking about.

Your career goals may range from obtaining more satisfaction from your current role to striving for a promotion or moving on to new opportunities. It’s time to work out how you will achieve these goals and plan on how to get there.

1. Negativity is contagious! To retain your motivation, stay away from those that bring you down with their pessimistic and complaining behaviors.

How are Headhunters Different from Recruiters? The terms “recruiter” and “headhunter” are sometimes confusing to folks outside the human resources realm. What do they mean? How do recruiters vs. headhunters compare? When contacted by a recruiter or headhunter, how do you know if they have your best interest at heart? Are they working for the employer you are hoping will hire you? Or are they an outside recruiter who is representing you to the employer? What’s in it for them?

If contacted by a recruiter who is on staff with an employer you are hoping will hire you, they are considered an internal, or in-house, recruiter. As part of the talent acquisition team or HR department, every interaction the internal recruiter will have with you is part of the evaluation process for the role they have in mind for you. They are working through the hiring process to assess you and move you to the next step in the evaluation process until that position has been filled. The internal recruiter likely became aware of you through an application you submitted to the company or they located your profile on a job board. Your communication with that internal recruiter is typically more formal in nature, and rightfully so, as everything you say and do really matters towards that single hiring outcome. With each communication, the internal recruiter is assessing you for fit – not only for a particular role within the company, but also for the company’s overall culture. A veteran’s job search can be intimidating, especially if you haven’t been in the civilian workforce for a while. A veteran’s job search in agriculture may be equally so if you’re new to the industry. However, AgCareers.com and our Ag Warriors partner employers have had a longstanding commitment to aid military veterans in their agricultural job search. Check out some of the ways veterans can easily search for jobs in agriculture utilizing AgCareers.com:

AgCareers.com is excited to present our first ever virtual career fair exclusively for military professionals and veterans on November 9, 2017. Join us from 10 am to 4 pm Eastern to visit with employers like CHS, DuPont, Farm Credit Services of America, Hogan Trucking, Tyson Foods, and Valent USA about available opportunities in agriculture. This is an event like none other currently available. A veteran’s job search is always made easier with career fair opportunities, and a virtual career fair makes it possible to connect with employers without leaving your home. We look forward to visiting with you on November 9!